In this guide, I assume you just got your OAK camera (e.g. OAK-D) and you want to give it the first try to explore what is possible with it and what you can achieve when working with it.

Let’s start with the device setup below

If your OAK came with an inlcuded USB cable, we suggest using that to connect OAK camera to the host computer.

Make sure to use USB3 cable! If you aren’t, force USB2 communication in the program. USB3 cable is colored blue in the inside of the USB-A connector of the USB-C cable.

Make sure that the device is connected to your host (which can be a PC or Raspberry Pi or another capable device) directly to a USB port, or via a powered USB hub.

On Ubuntu, you can check if a new USB device was detected by running

If you are running other OS than Ubuntu, or you think something has gone wrong, we have detailed OS-specific installation guides here.

If you are using PoE device, you should follow the Getting started with OAK PoE devices tutorial.

If you prefer, we’ve encapsulated all setup procedures inside a single .exe file you can download here and skip the Setup section.

When downloaded and run, it will install all necessary components and package requirements. Once finished, it will run the demo script automatically

In this section, I will describe how to install the demo script manually with a command line

First, download a repository package from here and then unpack the archive to a directory of preference. Next, open a terminal session in this directory.

First, open the terminal session and go to a directory of preference, where you’d like to download your demo script. Then, run the following code to download the demo script

To create and use the virtualenv, you can follow an official python guide to virtualenvs or follow os-specific guides on the web, like “How to Create Python 3 Virtual Environment on Ubuntu 20.04”

This will make sure that you are using a fresh environment and that Python 3 is the default interpreter - this can help to prevent potential issues.

I usually create and use virtualenvs by running

And this may require installing these packages prior

Once the demo source code is downloaded, and you have your terminal session set up, the next thing that has to be done is to install all additional packages that this script requires (together with the depthai Python API itself).

To install these packages, run the install_requirements.py script

If you are using a Linux system, in most cases you have to add a new udev rule for our script to be able to access the device correctly. You can add and apply new rules by running

Now, you should be able to start using the demo script, which we will do now

Having everything set up, we are now ready to use the demo script by running

Running the demo for the first time, the script will compile and download a default mobilenet-ssd model, configure the OAK camera and then show a default color preview that will contain a scaled preview from the RGB camera from your device. 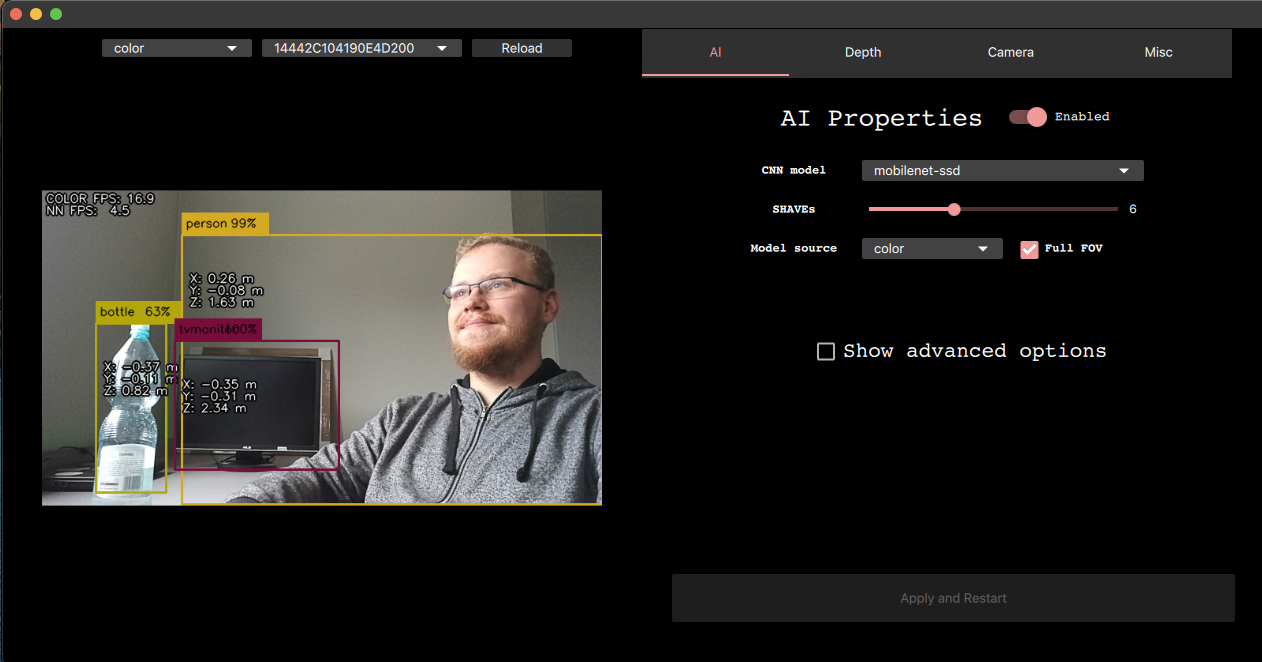 To see other previews from the device, you can use the preview switcher that is visible in the top-left section of the GUI

While the demo was running, you could see the detection results - and if you were standing in front of the camera, you should see yourself detected as a person with a pretty high probability.

The model that is used by default is a MobileNetv2 SSD object detector trained on the PASCAL 2007 VOC classes, which are:

So give it a try to detect different objects, like bottles or apples 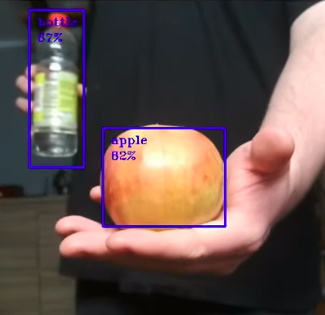 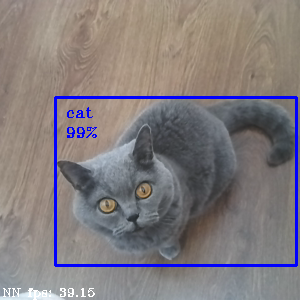 We have prepared other models, which you can try and evaluate with ease. To run the demo script with e.g. face-detection-retail-0004, click on the CNN Model combo box and select mentioned model

Which will allow you to detect human faces, like below 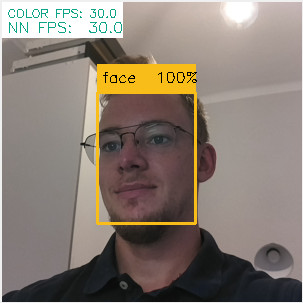 You can use this combo box to change the model that is being run on the DepthAI. It’s also possible to use command line to select

Below, there is a list of models that you can use, having just the demo script downloaded

All of the data we use to download and compile a model can be found here.

In this section, we’ll go through the config options available in the demo script, allowing you to try out different configurations 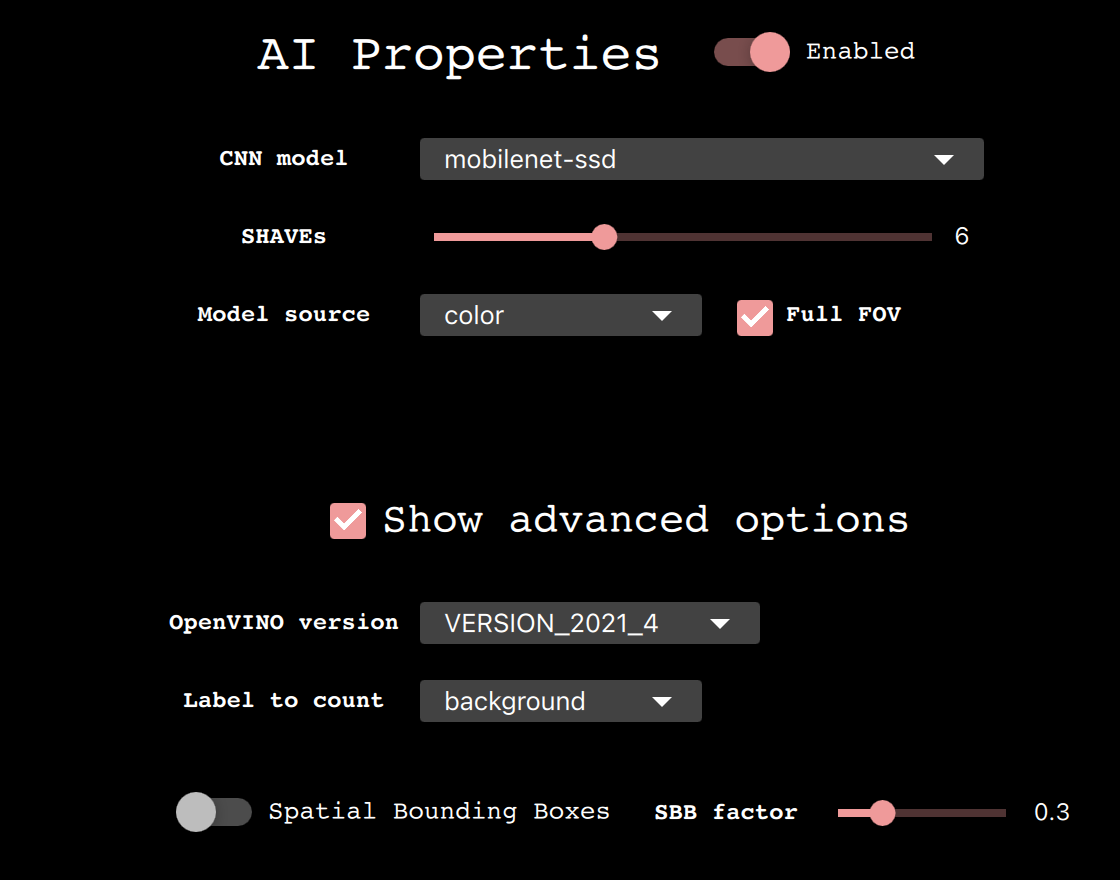 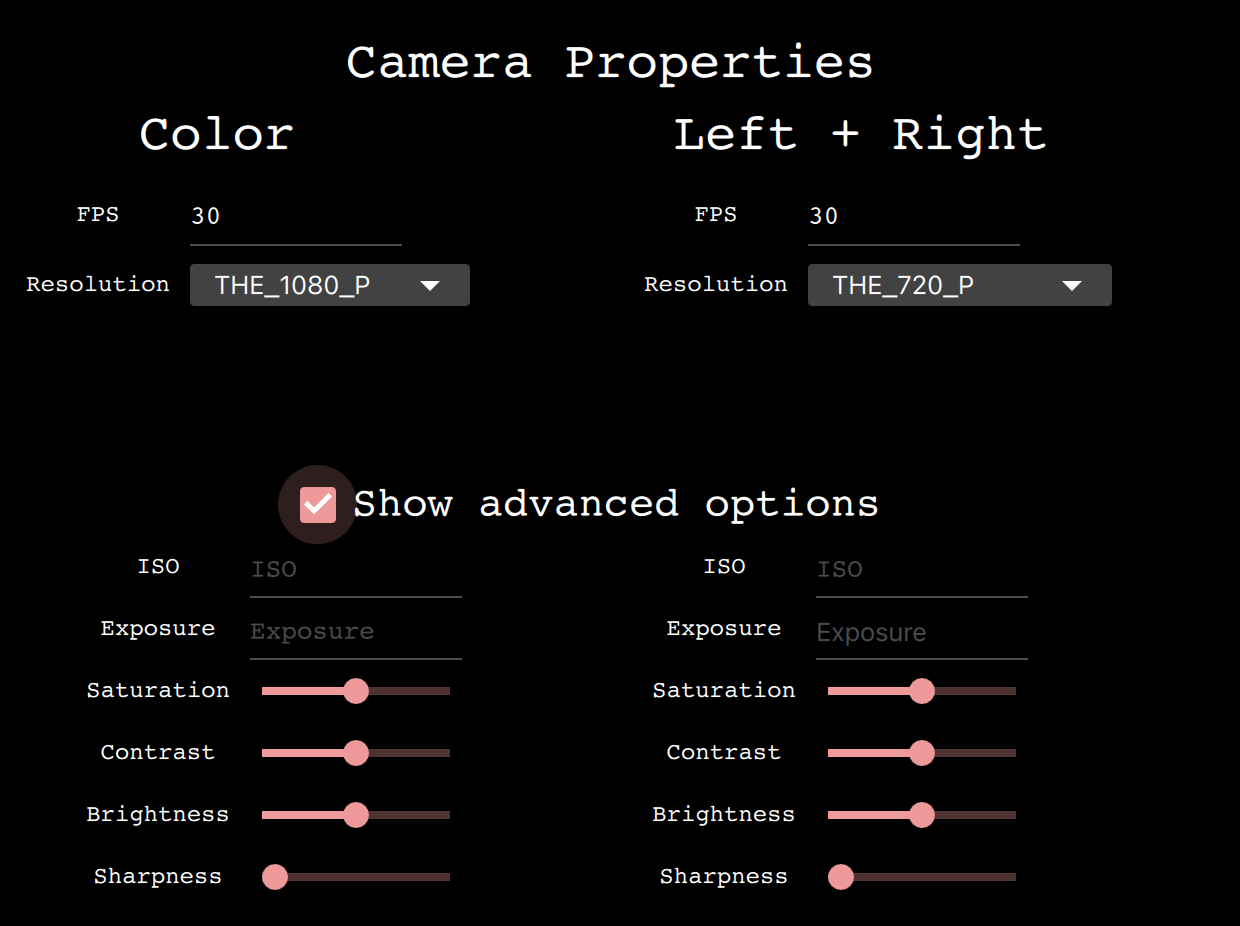 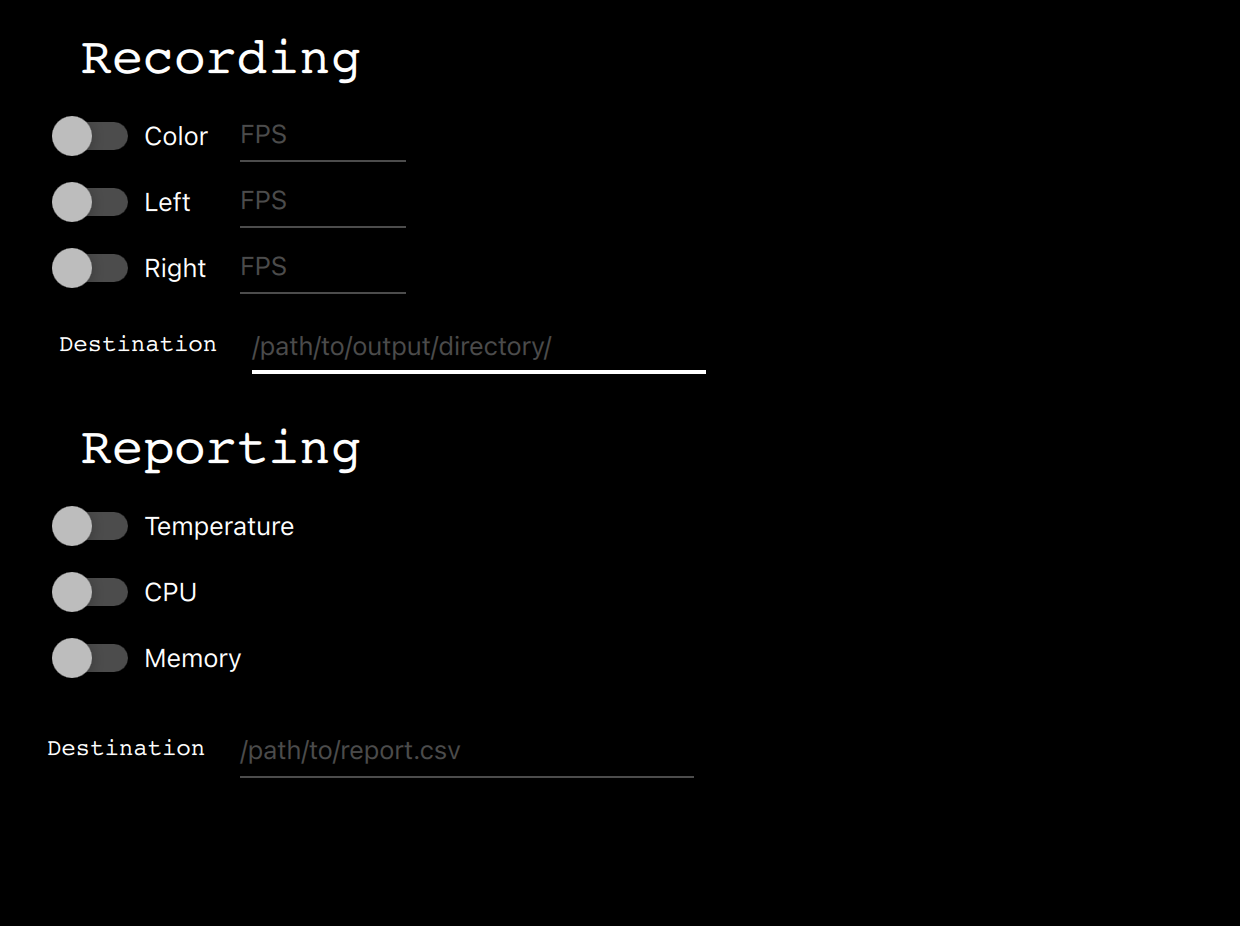 Let’s assume you want to run a custom model which you downloaded from the model zoo or trained yourself (or both). To prepare your model to be runnable on DepthAI, it has to be compiled into MyriadX blob format - which is an optimized version of your model, capable of utilizing MyriadX chip as a processing unit.

In our demo script, we support a few ways you can run your custom blob, which will be covered below. As an example, I’ll add a custom face detection network called custom_model (substitute with your preferred name) and run it with the demo script

To receive a MyriadX blob, the network has to be already in OpenVINO IR format (consisting of .xml and .bin files) that will be used for compilation. We won’t focus here on how to obtain this representation for your model, but be sure to check official OpenVINO conversion guide.

To convert custom_model.xml and custom_model.bin, we’ll use the blobconverter cli - our tool that utilizes Online MyriadX blob converter to perform the conversion. No local OpenVINO installation is needed in this case, as all of the dependencies are already installed on the server. If your model is in TensorFlow or Caffe format, you can still use our tool for conversion, just note that you’ll have to use different input flags and sometimes provide a custom model optimizer args (Read more)

Now, having the blobconverter installed, we can compile our IR files with the following command

By running this command, blobconverter sends a request to the BlobConverter API to perform a model compilation on provided files. After compilation, the API responds with a .blob file and deletes all source files that were sent with the request.

After a successful compilation, blobconverter returns the path to the downloaded blob file. Since this blob is required by the depthai repository, let’s move it there

We need to provide some additional configuration for the demo script to run this blob. The demo script will look for a custom_model.json for details on how to configure the pipeline and parse the results.

If your model is based on MobileNetSSD or Yolo, you can use our detection output format. If it’s a different type of network, you can use raw (default) output format and provide a custom handler file to decode and display the NN results.

You can use these configuration examples to customize your custom_model.json inside resources/nn/custom_model directory

Having the files in place, we can now run the demo with our custom model 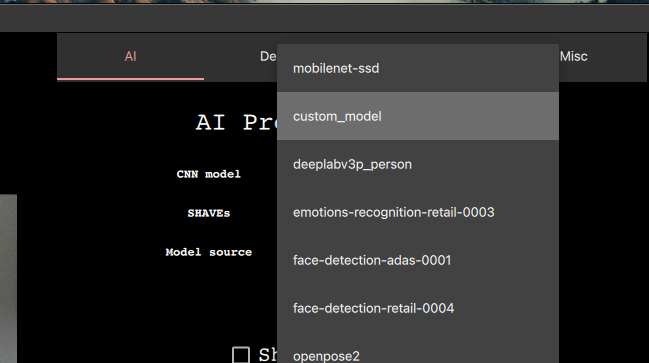 Custom handler is a file that the demo script will load and execute to parse the NN results. We specify this file with handler config value, specifying a path to the file of preference. It also requires raw output format, since it prevents the script from handling the results itself.

The first method, decode, is called whenever a NN packet arrives from the pipeline (stored as a packet param) also providing a nn_manager object that contains all nn-related info that was used by the script (like input size etc.). The goal of this function is to decode the received packets from the NN blob into meaningful results that can later be displayed.

Below, you can find an example handle.py file that decodes and displays MobilenetSSD-based results.

With the custom face detection model, using this code we receive the following output 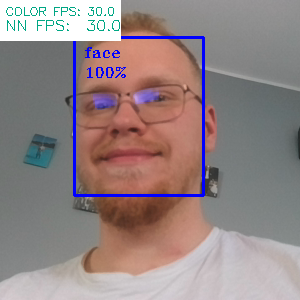 We already use this handler mechanism to decode deeplabv3p_person, that comes as one of the available networks in the demo script to use

Since files in the IR format can be large, and we’re both downloading the blob and uploading IR format to the server, we have incorporated an OpenVINO-like model.yml file structure that the BlobConverter server uses internally as well. You can check how this file looks like in OpenVINO model zoo or in available models in demo script.

This file is used by the OpenVINO model downloader that is used to download the required files for compilation. In our demo script, we use these files to provide a URL to the NN source files instead of uploading them along with the source code. It is also useful because on-demand compilation allows us to use the same configuration while requesting a different amount of MyriadX SHAVE cores.

You can also leave the model.yml file inside the resources/nn/<name> directory. This will make the demo script perform the conversion for you and run the received blob

If you’d like to add some custom functionalities to the demo yourself or just check how do certain variables look like, you can use a callbacks file, that should contain methods that the demo will call during execution on specific events.

These methods allow building custom functionalities on top of the demo script itself, whether it’s just printing or counting the data from NN or modifying how to display the frames or even make custom database/API connections to send the data to external destination.

By default, the demo script will use callbacks.py file in the repository, but this path cam be changed using -cb <path> / --callback <path> flags

Importing demo as a class¶

If preferred, the Demo script can also be imported like a regular class - this allows to control when the demo is starting up and when does it run. A simple example of how to run the demo from Python code is shown below

Remember that PYTHONPATH env variable must contain a path do depthai repository for the imports to work. Alternatively, you can place the script along depthai_demo.py in the repository

In the previous sections, we learned how to preview basic DepthAI features. From this point, you can explore the DepthAI world further