Use a Pre-trained OpenVINO model¶

In this tutorial, you’ll learn how to detect faces in realtime, even on a low-powered Raspberry Pi. I’ll introduce you to the OpenVINO model zoo and running models from this ‘zoo’. Haven’t heard of OpenVINO or the Open Model Zoo? I’ll start with a quick introduction of why we need these tools.

Under-the-hood, DepthAI uses the Intel MyriadX chip to perform high-speed model inference. However, you can’t just dump your neural net into the chip and get high-performance for free. That’s where OpenVINO comes in. OpenVINO is a free toolkit that converts a deep learning model into a format that runs on Intel Hardware. Once the model is converted, it’s common to see Frames Per Second (FPS) improve by 25x or more. Are a couple of small steps worth a 25x FPS increase? Often, the answer is yes!

What is the Open Model Zoo?¶

The Open Model Zoo is a library of freely-available pre-trained models. Side note: in machine learning/AI the name for a collection of pre-trained models is called a ‘model zoo’. The Zoo also contains scripts for downloading those models into a compile-ready format to run on DepthAI.

DepthAI is able to run many of the object detection models in the Zoo, and several are pre-included in the DepthAI Github. repository. We will be using one such model in this tutorial, is face-detection-retail-0004 (pre-compiled here on our Github, and here on the OpenVINO model zoo).

We’ll cover converting OpenVINO models to run on DepthAI in a later article. For now, you can find the models we’ve pre-converted here and brief instructions on how to do so here.

All dependencies are installed and the repository is checked out to ~/Desktop/depthai.

This tutorial has the same dependencies as the Hello World Tutorial - that the DepthAI API has been installed and is accessible on the system. See here if you have not yet installed the API.

The depthai_demo.py file can be modified directly to you do your bidding, or you can simply pass arguments to it for which models you want to run.

This will then run the a typical demo MobileNetv1 SSD object detector trained on the PASCAL 2007 VOC classes, which are:

I ran this on my iMac (OS X setup here) with a microAI sitting on my desk pointing upwards randomly - and it makes out the corner of my iMac (which is barely visible) and correctly identifies it as tv/monitor:

Execute the script to see an annotated video stream of face detections:

The flow we walked through works for other pre-trained object detection models in our repository (here), which includes:

Simply change the paths above to run the other models there, adding the correct labels (or funny ones, should you choose). And also you may notice networks like emotion recognition… those networks are actually intended to be run as a second stage network (as they are meant to be applied only to images that contain only faces). So to use the emotions recognitions network, use the command below to tell DepthAI/megaAI to run it as the second stage: 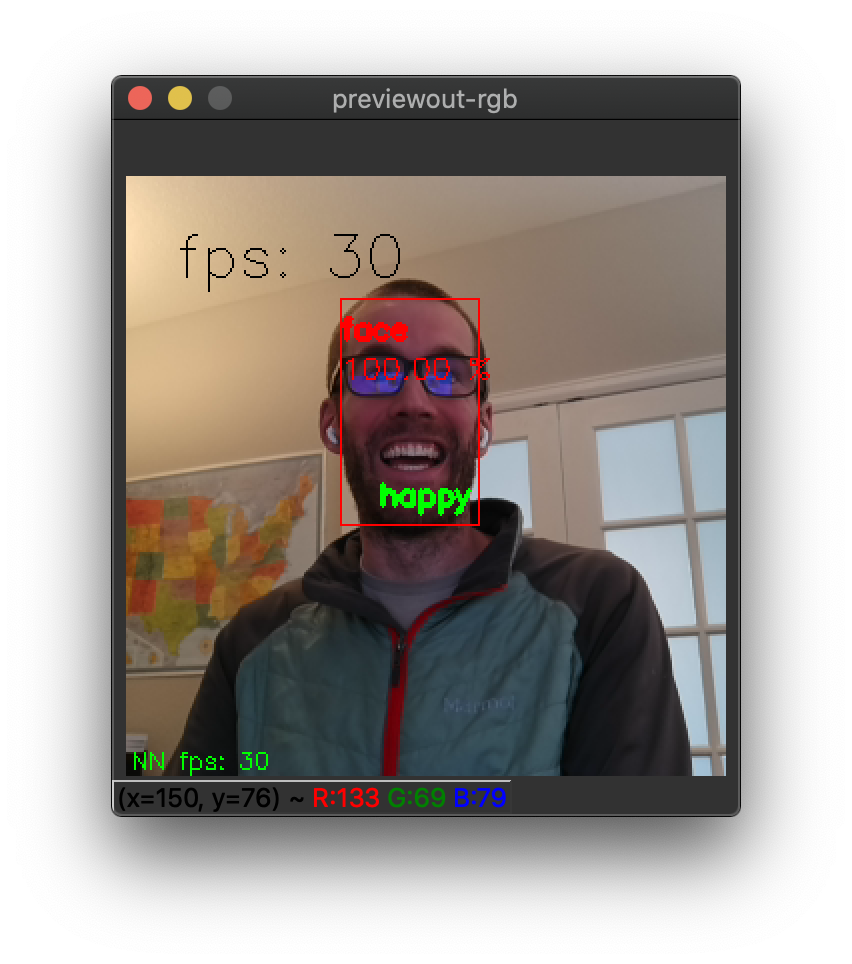 And what is this -dd option we’ve been running? Why is that there?

It’s there because we wanted to save the best for last. It stands for disable depth (and has the long-form option --disable_depth). So if you remove that, DepthAI will now calculate the 3D position of the object being detected (a face in this example, but it works for any object detector.) (And if you’re using microAI, leave it there, as microAI is monocular only - no depth information.)

So you get the full 3D position of the detected object, in this case, my face.

So that the full xyz position in meters is returned. See below.

So by default DepthAI is set to return the full 3D position. So in the command above, we actually specify for it to not be calculated with -dd (or --disable_depth).

And there you find the 3D position of my mug!

You can than choose other models, change the labels, and you’re off - getting real-time 3D position for the class of interest.

Play with the feature and please share demos that you come up with (especially if you make a robot that stalks your cat) on discuss.luxonis.com and if you run into any issues, please ping us on our Github.

And if you find any errors in these documents, please report an issue on the docs github) on the bottom of this page to give us the correction!

We call this mode of spatial AI ‘Monocular Neural Inference fused with Stereo Depth’. To visualize how this mode works, it is helpful to overlay the neural inference bounding box over the depth results directly.

To visualize this, let’s overlay the results directly onto the raw depth information (visualized in OpenCV HOT colormap): 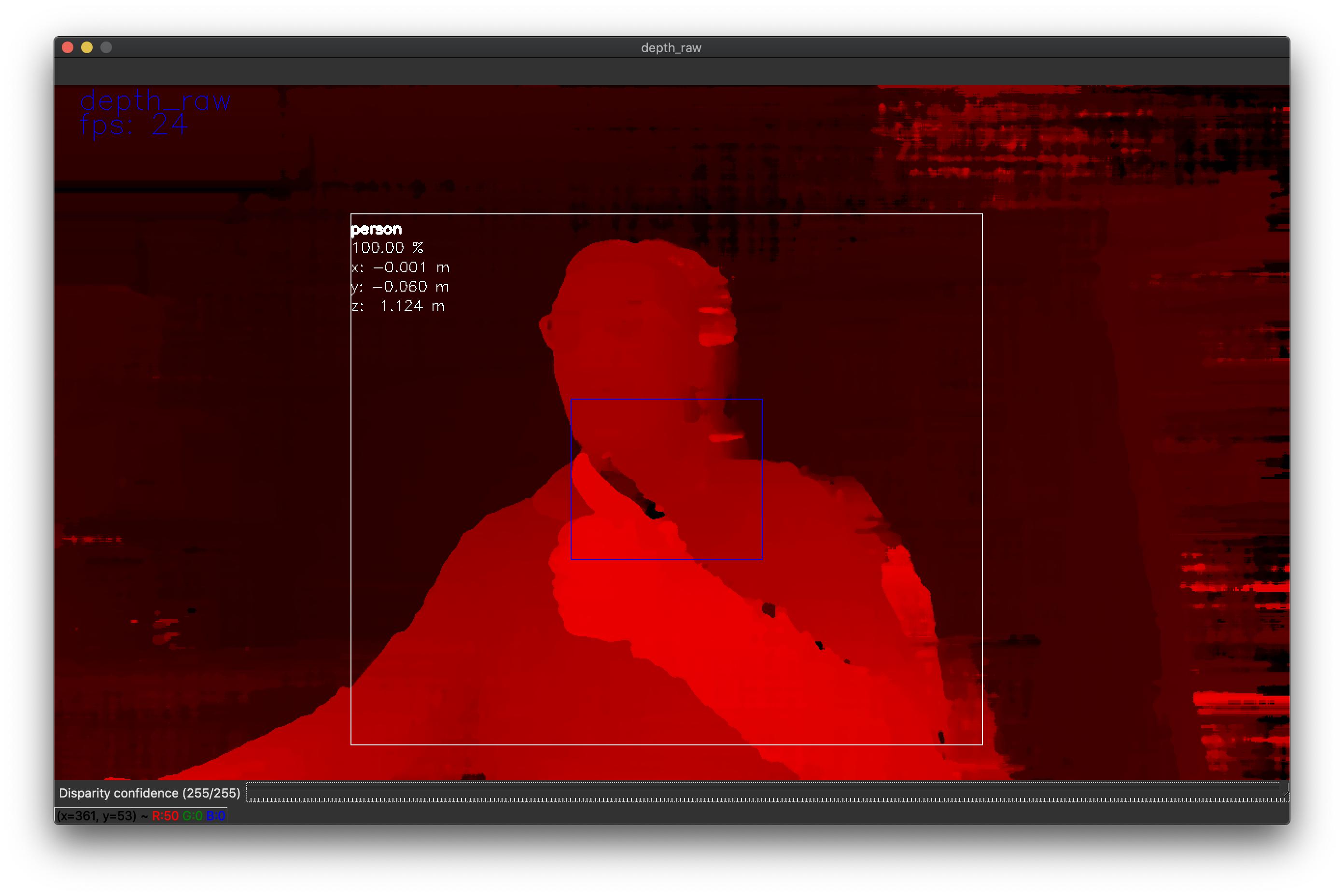 Below we’ll use another technique, which we dub ‘stereo neural inference’ (or ‘Stereo AI’) which works well for smaller objects and also pixel-point features like facial landmarks and pose-estimator results, etc. 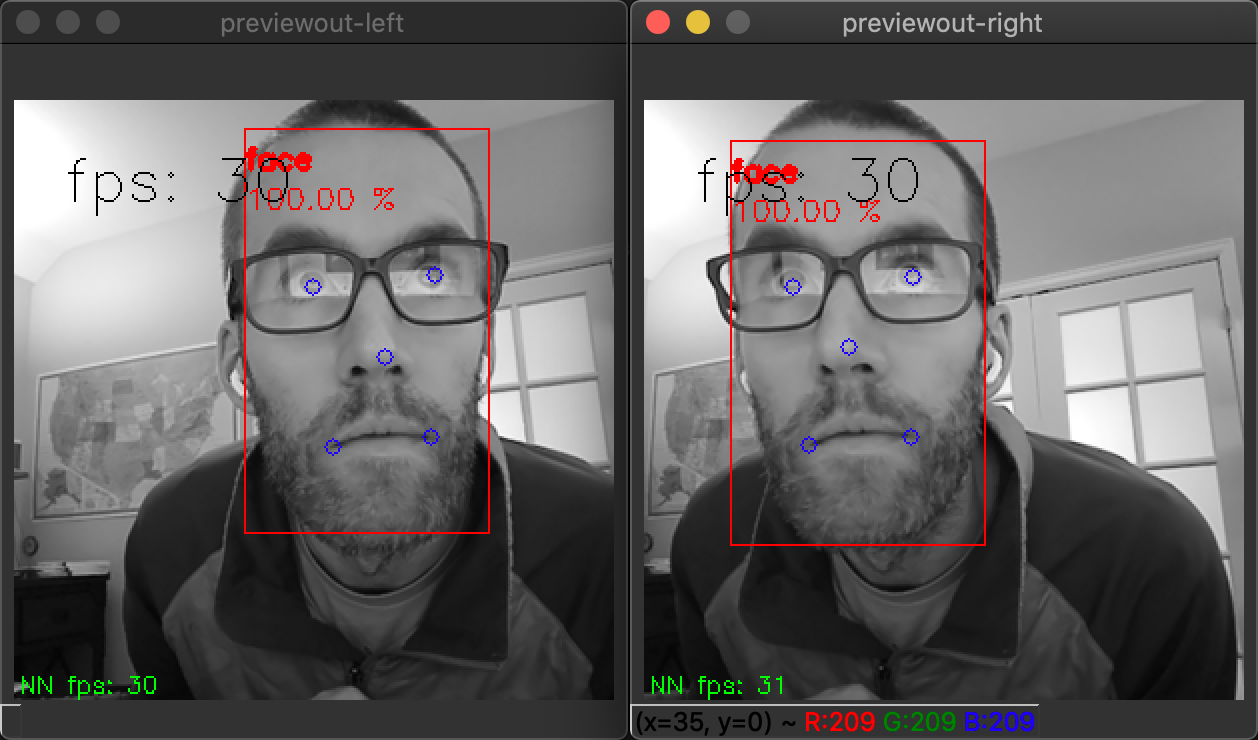 This can be run with the following command: